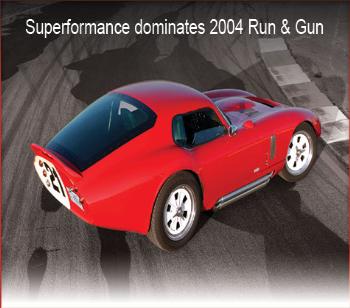 After an absence of 2 years, Superformance returned to the 2004 Run & Gun shootout at the Gateway International Raceway in Collinsville, IL, and demolished the opposition!

Drivers and their mounts competed in three classes in the two-day event on August 21/22 – Street, Prepared and Pro. Dennis Olthoff (Superformance Coupe) won the Pro Class overall. Not only did he beat all the other Pro cars, but he did it in a stock standard street car – with the radio playing and the air conditioner going full blast! His victory is a convincing demonstration of unmatched skill and an outstanding street car.

In the individual events, Dennis came second in the Road Course to a Lola T70 full blooded Pro racer. Lola had three different drivers trying to beat Dennis’ time in the Autocross, but to no avail. The Coupe/Olthoff combination was simply unbeatable.

In addition to being first in the Autocross, Dennis was the fastest Pro on the track, did a commendable 11.1 sec / 131 mph on the drag strip and took the Pro Top Dog, Big Block.

Just to rub in the superiority and reliability of Superformance products, Bill Belcher won the Prepared Class overall, with Ron Frohs in his Mk III in second spot. Bill really smoked it on the drag strip, where he ran some impressive 10 second runs on pump gas with no power adders.

Even the little SPF S1 earned its laurels. Richard Price piloted his car to victory in the Bracket portion of the Drag event.

This year’s Run & Gun proved yet again that there are two kinds of replicars in the US – those that claim superiority on the track – and those that prove it!