Rave Review for Coupe in UK 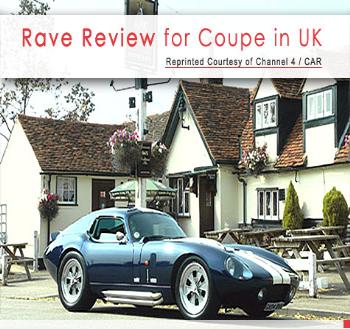 Some 40 years ago the AC Cobra ruled the race tracks of North America. In national championships it was the class of field and, for many, that would have been enough. But not for Carroll Shelby. Shelby, the Texan who had won Le Mans for Aston Martin in 1959, was not content with simply dominating in his own back yard. He had gone to Le Mans in '59 in the face of apparently overwhelming opposition from Ferrari but humbled the might of Maranello. It was something he felt he could develop a taste for.

Problem was, when pitched against this rather more serious international opposition, the Cobra was found to be seriously lacking. Antediluvian suspension meant they struggled to keep up with such as the Ferrari 250GTO in the corners while the Cobra's bluff shape meant that, despite its bigger, more powerful engine, the rather more slippery GTOs still came past on the straights. So Shelby asked a young designer called Peter Brock to craft a new body for the Cobra and the Daytona Coupe was born. And it transformed the Cobra's fortune.

It was so fast that Enzo Ferrari had to get the last round of the 1964 world sportscar championship cancelled to stop the Daytona taking the title. How did he do this? Easy. It was at Monza. Knowing he was beaten, Ferrari withdrew from the GT class for 1965 and the Daytonas swept the field and passed into history.

What you're looking at here is not a Daytona Coupe. Just six were built and each is worth several million. But in many ways this replica, the Superformance Le Mans Coupe, is even better. And it costs just £88,000.

Certain people will regard such a comment as sacrilegious, Carroll Shelby (who had the first one imported into the US impounded) among them. And, on the face of it, it's hard to see how a plastic-bodied, South African built imitation of one of America's greatest racers could deserve even to sit in the same sentence as the great Daytona. Is this not to the Daytona what endless numbers of grotty GT40 replicas are to Ford's finest racer? Not quite.

For a start it too was designed by Peter Brock, using his original drawings. The chassis is the work of the same man who did the Daytona's chassis but this time starting with a clean sheet rather than having to adapt the Cobra's archaic suspension. Forty years on, they even used the same test driver.

The result is a car which looks almost identical to a Daytona Coupe despite the fact that they have not a single line or dimension in common. Of course it is beautiful but what you notice most is its ferocious presence. From the jutting nose, past the side-exit pipes to its fabulously abbreviated tail, it sweats purpose from every inch of its composite body.

The cabin is a work of art too: simple, minimalist and pure 1960s race car. There are small chrome-rimmed dials everywhere, a fat three-spoke steering wheel, no-nonsense switches, leather bucket seats and a fly-off handbrake.

But where even good replicas often fall down is matching the performance of the original and, it's true, the Le Mans Coupe does not boast the same level of performance as a Daytona Coupe. It's much faster than that.

One brave test driver in South Africa has had one up to 207mph with more to come and when you'll learn what's providing the power, you'll know why. Under the bonnet lies neither a Rover V8 nor a modern four cam Ford engine, such as that used by cars like the Mustang and Lincoln Town Car. It's a Ford V8 engine alright, but it's a pure old style racing motor, with an iron block, ally heads, one camshaft in the middle of the Vee operating two valves per cylinder via long pushrods. Just like the Daytona Coupe. Except this engine has been fettled by ace tuning wizards Roush Engineering. The result is a 6.6-liter power plant, giving 510bhp and, count 'em, 590lb ft of torque. In a car weighing 1250kgs.

By comparison Ferrari's flagship 575 Maranello has a comparable 515bhp but a fairly measly 434lb ft of torque - and it weighs almost half a tonne more. Which is why Superformance (the same people who build Nobles) claim it will hit 100mph from rest in 8.2sec, despite the traction disadvantages of its front engined/rear drive layout. This is a performance level to make the likes of the 575 and Lamborghini Murcielago look really rather sick. It's closer to the Mercedes-Benz SLR McLaren and Porsche Carrera GT ultracar level. Yet the car is less than a third of their price.

I haven't even mentioned the noise yet. If you've ever seen Bullitt or even the Dukes of Hazzard you'll have an idea of how a big block American pushrod engine fed by a four-barrel Holley carburettor sounds. But when that engine has forged pistons and rods, is balanced, blueprinted and race tuned, it takes the sound to a whole new level. Impossibly aggressive and hard edged, it emits a blue collar, red neck thunder courtesy not of hours of acoustic tuning in semi-anechoic chambers but a bloody big engine breathing through unimpeded exhausts. It is laden with promise.

Get behind the wheel and the abundance of dials and switches makes you feel more like a 1960s fighter pilot than a mere driver. Turn the key, flick on the ignition, then the fuel pump, hit the starter and wait for the bang.

All but one of the control weights is suitably heavy. The clutch depresses with effort and the gear lever slots into the first of its six ratios only if given strong arm guidance. The brakes have only mild servo assistance while even the accelerator requires a firm prod to awaken the engine's interest. Only the super light steering feels odd. Then again, if you're used to 1960s American cars, even this is to be expected.

On the road it's one of those cars which rewards restraint. You may wish to open it up on every conceivable occasion, but you have to remember that while a quick squirt in a car like a Porsche Boxster might take you to 80mph, in the Le Mans Coupe you'll be on the far side of 140mph, if not in jail.

You have to pick your moments but, when you do, it is like the gates of automotive heaven opening before your eyes. The engine, until now a gurgling, menacing presence under the bonnet, explodes into life and will overwhelm the rear tyres in first and second gear on a dry road unless you're careful with the throttle. At first the acceleration feels feral - not entirely under control but you soon learn that's just because you're expecting feedback through the wheel and there isn't any. Rely on the seat of your pants rather than the tips of your fingers for the information and you'll soon be back in charge again. I ran out of nerve and road at about 150mph, at which point it was still gaining speed at an astonishing rate.

All of which probably sounds like a fairly grown-up way of passing the time. And so it did to me until we got to the corners. If I could create the template for my ideal road car, it would have its engine in the front, its driveshafts at the rear, double wishbone suspension at each corner, a ludicrous amount of torque and a very tight limited slip differential. The Le Mans Coupe ticks every box.

The diff and suspension geometry actually mean its traction is surprisingly good but if you do manage to prise the rear end from its grip on the tarmac, you will find yourself travelling extremely sideways very quickly indeed. Again, the feel-free steering does the car no favours but you soon learn that although the tail moves at speed, it does so in a linear fashion and is therefore easy enough to round up. Discover this and you can slide it almost anywhere no-one's looking, before rocketing up the road ahead, watching your GoodYears vaporise in the mirror.

I approached the Superformance with respect for its creators and therefore expecting a well crafted and honest recreation of an old legend. What I had not expected was one of the greatest driving machines ever to grace the public road. This car is an astonishing achievement: gorgeous, almost indescribably fast and utterly true to its roots. In short, far from defiling the memory of the Daytona Cobra, it actually contrives to honor it. And that is its greatest achievement by far.