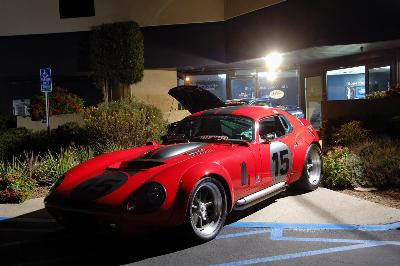 Orange County Cobra Club (COCOA) held its 35th anniversary celebration at the Superformance and Shelby Distribution USA headquarters. Over 100 members attended. It was a great turnout for the club. Lance Stander CEO of Superformance announced that the company would be adding a licensed Corvette Grand Sport Street car to the current lineup which currently consists of the MKIII, Shelby Daytona Cobra Coupe and the GT40 MKI and MKII versions. The event was narrated by Steve Glob who is the Exec. Vice President of the club along with Bob Stockwell the president. The guest speaker was Ed Swart who is the President of HSR West. Future events for the club include the New members B-B-Q and cruise in March , open track and driver training day also in March. For more information on the club please visit the Website at www.cocoaoc.org . Cobra Owners Club of America, Orange County (COCOA) invites you to become a member. Share the camaraderie of this 25+ year old organization. COCOA is the oldest Southern California car club and membership is open to all who have an original Shelby Cobra, a Cobra Replica, a Shelby Mustang or even a Ford product.