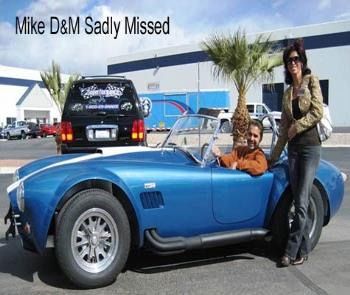 Many of you who knew Mike Colando were aware of his fight against a rare disease called Amyloidosis. Mike was in New York undergoing leading edge treatment which we all hoped would give us many more years with him but sadly, Mike died on 11/20/2007.

They say “it’s not work, if you love what you’re doing” and that was true of Mike – he was a car enthusiast like all of us! Beyond that, he was a loving father and husband, a good friend and a great guy who will be sorely missed by all those who knew him. Mike left some big shoes to fill but Mike Junior, Kevin and the rest of the D&M family will do a great job continuing to run D&M as Mike wanted. I wanted to share this picture of Mike and Terry, taken at SCOF earlier this year – it captures how I (and many of you) will always remember Mike!