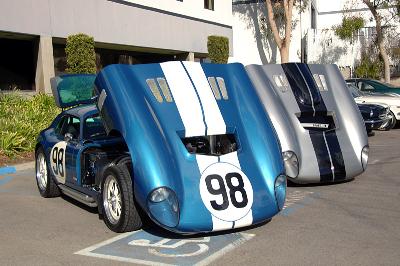 The Shelby Cobra is perhaps the World's most iconic and thus copied car. Less than 1000 original Ford AC Cobras were built by Carroll Shelby. Tens of Thousands of copies of the original 289 and 427 AC Cobras exist with most of them being "kit cars" copies. In this exclusive TFLcar video we visit Superformace in Southern California to learn why the Shelby Cobra is such an iconic race car and automobile. Superformance along with Carroll Shelby's own Shelby Automobiles, Inc build what many call "Continuation Cars". These are brand new Shelby Cobra roadsters and coupes that have official Shebly CSX serial numbers. They are of course not the original series of Shelby Cobra cars which now demand hundreds of thousands of dollars by collectors when they do come up for sale , but they are also not copies. They are simply new Shelby Cobras built as a continuation of the original series of cars. In other words, these are new Shelby Cobras. If you are a fan of Carroll Shelby and his cars you'll like this video as we get deep into the history of what many believe is America's most beautiful and iconic race car.