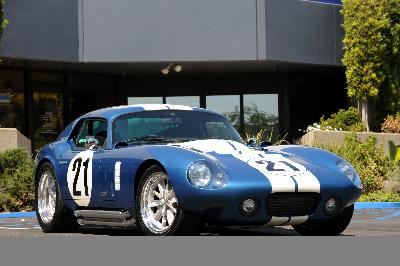 Press Release: The long-awaited new CSX 9000 series Shelby Cobra Daytona Coupe MKII with a number of improvements, upgrades and new features has arrived in the USA. The new model will be allocated CSX9000 series chassis numbers and will come complete with a Shelby-issued MSO certificate and Chassis tag. “The new CSX 9000 Shelby Cobra Daytona Coupe will replace the SPF Daytona Coupe and this famous marque will in future only be marketed as a Shelby product”, says Lance Stander, President of Shelby Distribution USA of Irvine, CA. The new models are available with a fiber glass body or aluminum-body. “Every CSX 9000 series Shelby Cobra Daytona Coupe will be listed in the Shelby World Registry, making this new addition to Carroll Shelby’s stable of sports cars a collector’s dream. The new Coupe will feature Shelby signature door handles and seat covers, and the stopping power for the powerful Coupe will be provided by Shelby branded brakes”. Asked how the Coupe had had progressed from a Shelby-approved replica of the original World famous Shelby Cobra Daytona CSX2000 series Coupe, that in 1965 won the World Manufacturers Championship to a full blooded new model range, Stander said market requirements had demanded that the new model be upgraded and improved in a manner that would make it worthy of the Shelby appellage. “A sports car with the heritage and image of the Coupe begged for improvements and new features to make it a worthy contender in the market in which it already is one of the most sought after contenders. This awareness led to the development of the CSX 9000 series”, says Stander. In order to increase the clearance between the driver’s head and the roof as well as between the driver’s left hand and the A-post, the seats were repositioned and the steering wheel moved over to the right. This created a much more comfortable seating environment. New external door handles do not mar the sleek look of the coachwork and facilitates entry without the use of a remote key, and the doors are fitted with electric windows. The side air intakes behind the doors now form part of the rear panel behind the B-pillars with an added quarter vent style window. In addition to improved interior air flow, visibility has been significantly improved. Gear heads will be delighted with the improved front and rear independent suspension. This development includes the replacement of the rose joints with ball joints, and the new design facilitates the adjustment of camber, caster and toe adjustment up front, as well as easy camber and toe adjustment at the rear. To eliminate noise, the front and rear anti-roll bars have been redesigned, the chassis has been stiffened and a new fuel tank with internal baffles incorporates a swirl pot design. To improve oil cooling the oil cooler has been separated from the radiator and fitted in an area with adequate air flow, the radiator core diameter has been increased and more efficient radiator fans are fitted. “With the high ambient temperature in most of the USA in summer, and the congestion on our roads, adequate engine and oil cooling are “must haves” in an auto that is as comfortable cruising along at 20 mph or when hugging the corners at well over a 100 mph!” remarked Stander. In keeping with modern design, the heater and climate controls for the air-conditioning have no cables and are operated via servo units, the side muffler pipes have been increased in diameter to ensure a deeper rumble, and the wheel wells have been adapted to accommodate 18 inch, deep dish Shelby Cobra style rims. “Although the new Coupe shares all the visual magic of the original, the new CSX 9000 series is just so much more sophisticated and will have enormous appeal in the market for full-blooded American retro-styled sports cars”, said Stander. The first two new Shelby Cobra Daytona Coupes have already been delivered, the order book is filling up fast and Shelby dealers are now taking orders for later deliveries. Production will initially be limited to 2 units per month. Orders can be placed with select Superformance dealers or on the Shelby dealers’ website at www.shelbydistributionusa.com Or 1888-SHELBYUSA.